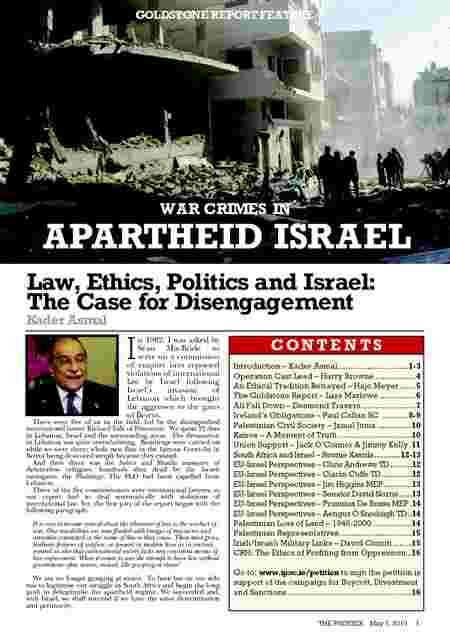 Cover of the IPSC/Phoenix Booklet

Coming bundled with the May 20th edition of Phoenix magazine, the booklet is notable not only for the range of it's contributers, but also for the fact that it features Irish politicians from all the Dail parties calling for sanctions against Israel - chiefly the suspension of Israel from the Euro-Med Agreement.

It takes the Goldstone Report as its point of departure for a critique of Israeli impunity, and asks whether the EU, instead of taking Israel to task for its crimes, has instead been complicit in those crimes. It also encourages civil society to support the international BDS (boycott, divestment, sanctions) campaign against apartheid Israel until it ends its crimes against the Palestinian people. Topics covered in the feature include: Operation Cast Lead and the Goldstone Report; Israel's apartheid regime; Ireland's obligations to the victims of war crimes; Boycott, Divestment and Sanctions (BDS); Trade Union solidarity with Palestine; Irish/Israeli military links; CRH and the Apartheid Wall; and EU-Israeli relations.

Speaking at the conference, Dr. Landy said: "The Goldstone Report is a central document – not simply for Palestine and Israel but for the future of international law. The issue of whether it is ratified and acted on will shape the world we live in. For Palestine it will answer the question – is the international community prepared to tolerate Israeli massacres and grant impunity to Israeli war crimes? The answer we give will determine whether Israel feels it can conduct future war crimes with impunity.

Dr. Landy continued: "We are delighted that people from all political parties and walks of life are featured in this supplement. The supplement showcases the diversity of voices speaking out on Palestine, in Ireland and abroad. In it, the writers move beyond rhetoric and indicate the concrete actions that they felt we, as a nation, should take." (Dr. Landy's full speech is available here: http://www.ipsc.ie/multimedia/IPSC_Launch_of_Phoenix_Su...y.mp3)

It is hoped that this booklet - which will also be available from the IPSC and selected bookshops - will become an educational, lobbying and mobilising tool for Palestinian solidarity in Ireland. 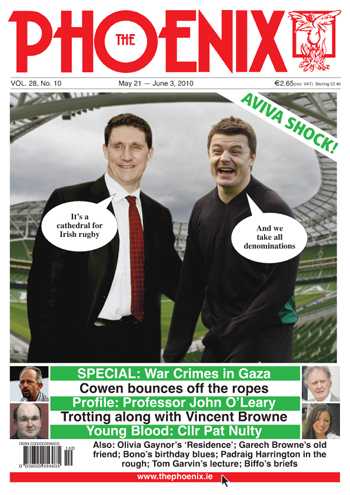