Vigil for Rachel Corrie at the apartheid "Israeli" embassy in Dublin
1pm-3.30pm Wednesday the 16th of March 2011 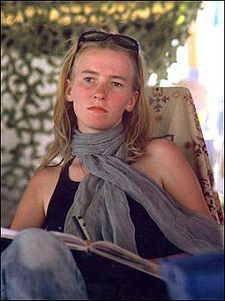 Rachel Corrie (April 10, 1979 – March 16, 2003) was an American member of the International Solidarity Movement (ISM). She was crushed to death in the Gaza Strip by an Israel Defence Forces (IDF) bulldozer when she was kneeling in front of a local Palestinians home, thus acting as a human shield, attempting to prevent IDF forces from demolishing the home. The IDF stated that the death was due to the restricted angle of view of the IDF Caterpillar D9 bulldozer driver, while ISM eyewitnesses said "there was nothing to obscure the driver's view." A student at the Evergreen State College, she had taken a year off and travelled to the Gaza Strip during the Second Intifada.

When will justice be served!

Invite all your friends to join this event.