On Sunday April 17th at 2pm the Ireland Palestine Solidarity Campaign (IPSC) will mark Palestinian Prisoners Day with a demonstration at the Spire in O'Connell St. 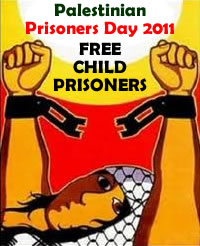 The demonstration will call for the release of all Palestinian political prisoners imprisoned by the Israeli State - those 'convicted' in Israeli Military courts and those interned without trial under the 'Administrative Detention' regime. There will be a particular focus on the issue of child prisoners - of which there are currently 216 (45 under the age of 16) being held in Israeli jails.[1]

According to ADDAMEER, the Palestinian Prisoners' Rights NGO, at present over 5,770 Palestinians are currently imprisoned by the Israeli state for resisting Israeli colonialism, Apartheid and oppression. Of those, 216 are children, 37 are women, 12 are elected Palestinian representatives and over 200 are 'Administrative Detainees' - that is they have been interned without trial not having been charged with any crime or seeing the secret evidence against them. Those 'convicted' prisoners were jailed by non-jury Israeli Military Courts (all Palestinians in the Occupied Territories are subject to Israeli military law, while Israel's colonial settlers are ruled by Israeli civil law - yet another example Israel's Apartheid system). These courts, biased from the outset, do not meet international fair trial standards.[2]