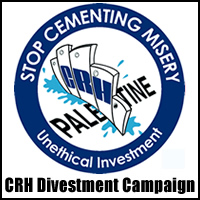 On Wednesday, 4 May, at 11am, Irish multinational CRH will hold their Annual General Meeting in the Royal Marine Hotel, Marine Road, Dun Laoghaire, Co. Dublin.  The Ireland-Palestine Solidarity Campaign plan a highly visual photo-friendly protest outside the venue, featuring a mock checkpoint with soldiers, scale model wall, and a 'human wall'.

This is a call out to all solidarity activists to turn up on the morning and become part of a striking human wall along Marine Road.

The wall will symbolise the illegal separation wall built by Israel in the occupied West Bank and will highlight CRH’s involvement with the wall and settlements.

What: The AGM is next Wednesday morning 4th May.

Where: opposite the entrance to the Royal Marine Hotel on Marine Road, Dun Laoghaire

What to wear: black or dark clothes-hopefully it will not rain but be prepared just in case. It is a windy road so bring warm clothes.

Who to bring: Please try to bring as many people as you can convince.

Why: The IPSC is organising this protest because CRH owns 25% of the Israeli company Mashav Initiative and Development Ltd which, in turn, owns Israel’s sole cement producer Nesher Cement Enterprises Ltd. Nesher provide up to 90% of all cement sold in Israel, including cement used in the construction of Israel's illegal separation wall in Palestine and illegal settlements and checkpoints. We are calling on CRH to end its shameful investment in Israel and to stop profiting from the occupation of Palestine by divesting from its Israeli interests.

Last year the issue of CRH's investment in Israel dominated the AGM proceedings and press coverage of the event - see: http://cosmos.ucc.ie/cs1064/jabowen/IPSC/ipsc/displayRelease.php?releaseID=329.

For more about the IPSC's CRH Divestment Campaign see: http://www.ipsc.ie/crhdivest