THE ETHNIC CLEANSING OF PALESTINE IS NOTHING TO CELEBRATE!

On Tuesday 10th May join the Ireland Palestine Solidarity Campaign in a silent protest vigil at the 'Israeli Independence Celebrations', sponsored by the Israeli Embassy. '

Attending the celebrations on the anniversary of the founding of the State of Israel is to celebrate a process of brutal ethnic cleansing and colonisation. 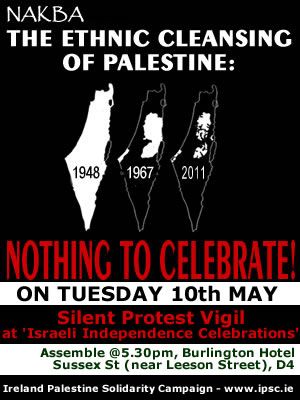 On Tuesday 10th May the Israeli Embassy in Ireland is hosting an event at the Burlington Hotel in Sussex St (near Upper Leeson Street), Dublin 4, celebrating the founding of the State of Israel. The establishment of Israel was achieved on the back of a campaign of vicious ethnic cleansing which saw over 700,000 Paletsinians expelled from their homeland never to return. Palestinians call these events "Al Nakba" (The Catastrophe).

The IPSC will peacefully, lawfully and silently protest outside this event. We will be providing tape with the word 'Nakba' to cover our mouths, to highlight the fact that in Israel, public commemoration of the Nakba is now illegal. See: http://www.haaretz.com/news/national/human-rights-group...59802

Israel was founded subsequent to a UN decision partitioning Palestine in 1947, but the state it founded was not within the partition boundaries set by the UN. Instead, before and after that UN decision Zionist forces carried out a ruthless campaign of ethnic cleansing, driving out the indigenous Palestinian population through a campaign of terror and selective massacre. The Israeli State was founded in 1948 in the midst of the forceful flight and expulsion of over 700,000 Palestinians, involving the destruction of over 500 villages amid scenes of terror. Celebrating the foundation of the State of Israel is to celebrate this campaign of terror and ethnic cleansing.

Attending the Israeli celebrations is tantamount to endorsing this illegal colonisation of Palestinian lands, a process that continues to this day.

We call on you to show solidarity with the Palestinian People and their struggle for their human, democratic and national, rights and call for the Right of Return of the Palestinian refugees expelled by Israeli forces before and after 1948, as enshrined in UN Resolution 194.