Our revolt is not Obama's 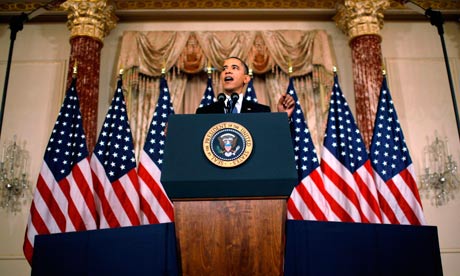 'Chemical sweeteners' … Barack Obama delivering his address on US policy in the Middle East and north Africa. Photograph: Rex Features

This wasn't slipping poison into the honey; it was smearing chemical sweeteners on to toxic pellets. Barack Obama listed what he sees as his country's "core interests" in my country Egypt and my region; his country's "core principles" governing how it will act towards us, and his policies to promote US interests within the frame of US principles. Let's translate the US president's description of his "core interests in the region" into effects on the ground:

"Countering terrorism" has implicated (at least) Egypt, Syria and Jordan in the US's extraordinary rendition programme, turning our governments into torturers for hire and consolidating a culture of security services supremacy and brutality that is killing Syrian protesters today and manifests itself in Egypt as a serious counter-revolution.

"Stopping the spread of nuclear weapons" highlights consistent US double standards as Arab nuclear scientists are murdered, the US threatens Iran, and Israel happily develops its illicit arsenal.

"Securing the free flow of commerce" has meant shoving crony capitalism down our throats, bribing governments to sell our national assets and blackmailing us into partnerships bad for us.

"Supporting Israel" has led to land, resources and hope being stolen from Palestinians while Egypt becomes their jailer and dishonest broker, losing its credibility and self-respect.

Obama has all the information above; he knows that Hosni Mubarak's dedication to delivering US "core interests" is why the Egyptian millions demanded his departure, why Tahrir proclaimed him an "agent of America and Israel", and why he is now under arrest.

The blame is not all with America. We had a regime that was susceptible, that became actively complicit; assiduously finding ways to serve US and Israeli interests – and ruin us. But: we got rid of it. Peaceably, with grace and within the law. We Got Rid of It.

So when Obama says, "We will continue to do" the things described above, it's a challenge. When he adds, "with the firm belief that America's interests are not hostile to people's hopes; they are essential to them" – it's obfuscation and an insult to every citizen across the world – including Americans – who followed our revolutions with empathy and with hope.

And he will continue to "do these things" through the same bad policies : projects for US companies paid for with Egyptian debt, more debt, more IMF and World Bank plans pushing us to privilege "growth" and "free trade" over real development and critical issues like food security. This is not what we want.

If Obama is serious about supporting self-determination, here's a to-do list: remove state department warnings and give tax breaks to Americans holidaying in Egypt and Tunisia; grant a temporary tax amnesty to Egyptian imports; find our stolen money and hold it until our elections; regulate the US security industry; stop US aid to Israel and Egypt; close tax loopholes that encourage US citizens to fund settlements in Palestine; encourage Israeli transparency regarding its nuclear weapons.

In the end, our revolutions are not by or for or about the US. We in Tunisia and Egypt, and soon in Libya, Syria, Yemen, are looking for ways to run our countries to the benefit of our people and the world. We see that democracy is a necessary, but not sufficient, condition. "Democratic" systems are failing their people, in Britain, in India, in the US, as millions fall into poverty, banks take precedence over hospitals and universities, the environment is degraded and the fabric of society frayed, the media are compromised, and politico-business scandals are standard entertainment.

The world needs better; and that's what we're working for.