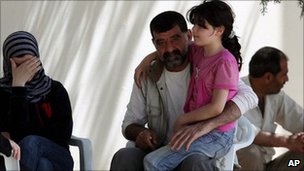 At least 4,300 people have now fled violence in Syria to seek refuge in Turkey, a senior Turkish official says.

A BBC correspondent on the border says the real number of displaced people is probably much higher.

An eyewitness described a tank attack on a nearby village on Friday morning, in which people were killed and crops destroyed.