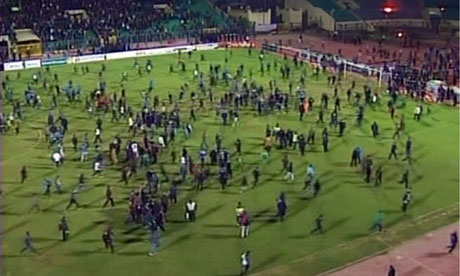 Fans rush the pitch during the riots that erupted after the match between Al-Masry and Al-Ahl in Port Said. Photograph: -/AFP/Getty Images

Twin brothers who play for the football team Al-Masry, whose match against a rival team in Egypt ended in a massacre, claim the violence was encouraged by the police with the backing of the army.

Captain Karim Zekri and his brother, Mohamed, told the website CommentMidEast.com that there was strong evidence the bloodshed was planned. More than 70 people were killed and at least 1,000 injured in the violence at the Port Said stadium following the home side Al-Masry's victory over Cairo-based Al-Ahly.

After the match finished, hundreds of Al-Masry supporters were seen to surge across the pitch to the visitors' end as panicked Ahly fans made for the exit. But it has emerged the steel doors were bolted shut, resulting in dozens being crushed to death.

"I have many friends who were in the stadium, and they swear to me that the police were saying to them 'Go and beat the shit out of them [Ahly fans] – they're saying you're not men'," said Mohamed, who was not playing and watched the game in a cafe near the stadium.

"During the second half, I saw about 10 armed thugs gathering outside the stadium, right in front of the police; there were about 50 policemen, but not a single one of them moved. The thugs had swords and were probably hiding other weapons. But I found the response of the police really odd. Other thugs arrived in cars and some went straight round to the away stand."

The 26-year-old brothers are symbols of Port Said football. Karim is a household name in Egypt, while his brother was considered the golden boy of Egyptian football earlier in his career.

Karim told the Egyptian football commentator Islam Issa that both teams had been ordered to their changing rooms after the match finished and the violence had broken out. It was only later that he realised what had happened. "We'd left our changing rooms and gone to the Ahly players' changing rooms to make sure they were OK, and there, we saw the disaster," Karim said. "I found corpses on the floor, and most of the deaths were from suffocation. People were squashed together and ended up dying that way. I went out of the changing rooms to help the Ahly fans get out."

He said the stadium's floodlights had been switched off. "We found out later that this happened as soon as we'd gone in – and this was one of the main causes of the disaster because people stamped on each other. I found people on the floor and I kept taking as many out of the stadium as I could and returning. The strange thing is that there were no police in the stands or in the player's tunnel where I was taking them out from."

The twins' claims are likely to reinforce the belief that the violence was orchestrated by the army against the "Ultras", the Al-Ahly fans whose experience confronting police at football matches was deployed with devastating effect against Egypt's security forces during the Arab spring.

Mohamed said he had felt something was wrong before kick-off. "Firstly, there was no real searching of fans as they entered the stadium, which is really unusual," he said. "Tickets weren't being checked, and there was no searching at all. And for the first time in the history of our town, the governor and chief of police did not attend this game."

Karim said he had heard that a man arrested on Friday had confessed to helping orchestrate the violence. "He said that there were more than 600 people hired from outside Port Said who entered the game. They'd taken money from one of the sacked National Democratic party members … He told them to kill and cause havoc in the stadium, and now everyone is searching for him."

The brothers said they believed they were risking their lives by speaking out. "We are both ready to die like those who already have, if that's what it takes for the truth to emerge, and God willing, everyone will know the truth soon," Mohamed declared.