As part of Israeli Apartheid Week 2012, the Ireland-Palestine Solidarity Campaign is honoured to host a talk and film screening by Iyad Burnat, a leader of the Bil’in Popular Committee Against the Wall. Iyad will talk about the ongoing civil resistance campaign, both in Bil’in and in other areas like Nabi Saleh, Nil’in, Budrus and Sheikh Jarrah. Born in 1973, Iyad Burnat is the head of the Bil’in popular committee and Friends of Freedom and Justice and will be a familiar figure to the many Irish who have travelled to Bil’in over the past number of years. 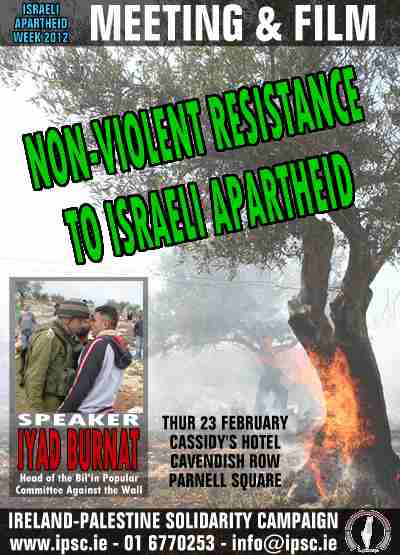 Bil’in has been at the forefront of the non-violent resistance to Israel’s illegal Apartheid Wall and policies in the occupied Palestinian territories, and has held weekly Friday demonstrations of locals, Israelis and international activists since 2005. During the course of the struggle its residents have faced severe repression at the hands of the Israeli, including frequent night raids and detentions (including of children). At least two people have been killed, and scores injured, during the Friday demos.

In June 2011 Bil’in’s activists scored a major victory when it was announced that the wall in Bil’in, which was stealing some 480 acres of village land to accomodate the illegal Israeli colonial settlement of Modi’in Illit, would be partially rerouted (four years after the Israeli Supreme Court ordered it to be).

While continuing to fight for the remaining 1350 dunams (330 acres) that are effectively annexed to the settlement of Modi’in Illit, the Bil’in Popular Committee announced a new strategy of building community and public buildings on lands that were given back as a way to assert their possession of them.

The regained land is designated as Area C, over which Israel retains complete control of both security and administrative matters. Due to this fact, it is nearly impossible for Palestinians to receive building permits in area C. Palestinian structures built without permit in Area C are often demolished by Israeli authorities and are almost never retroactively whitewashed. In contrast, illegal and unpermitted settlement construction is often retroactively issued the required construction permits, as was the case in the Matityahu East neighborhood of the Modi’in Illit Settlement, which was built on Bil’in’s lands.

This event is organised by the Ireland-Palestine Solidarity Campaign (IPSC) as one of a series of events taking place around Ireland during international Israeli Apartheid Week 2012 (20 – 27 February).