As part of the IPSC's Week of Solidarity Against Apartheid Walls in Palestine and Against the Siege of Gaza, the Kilkenny branch of the IPSC are proud to host a public meeting with Irish activists from the Irish sections of Viva Palestina and the Free Gaza Movement. VP and the FGM will be taking part in the international siege breaking convergence on Gaza that will coincide with the anniversary of Israel’s 2008/09 winter attack on the besieged coastal strip

The meeting will take place on Wednesday 11th November at 8pm in the Club House Hotel, Kilkenny. 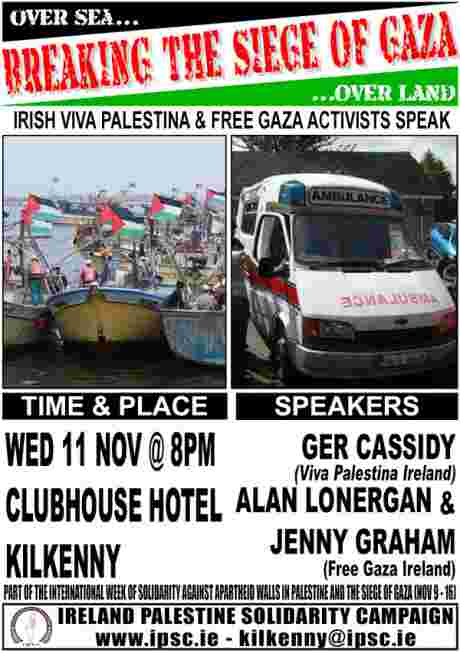 Ger Cassidy is originally from Tralee and has travelled to the West Bank a number of times. This mission will be his first trip to Gaza.

Viva Palestina Cork will be leaving from London with the rest of the UK convoy on the 5th of December to arrive in Gaza on the 27th of December – the anniversary of the beginning of the war which cost 1,417 Palestinian lives. This will also allow time for Viva Palestina to coordinate with other groups to ensure a much bigger group to arrive at the Gaza border. The first Viva Palestina Convoy took place in February 2009 and crossed into Gaza with over 100 vehicles and more than €1 million in aid.

Already Viva Cork have one ambulance to drive to Gaza and give to the people there and plan to have more by December. They now need to raise funds for medical supplies to donate as well as for the cost of getting the vehicles there. Everyone involved in Viva Palestinan Cork are volunteers and all money raised goes directly to the vehicles, medical supplies and getting them to Gaza.

Alan Lonergan is from Mayo and will sail on the next Free Gaza mission which will include an Irish boat. He is a Free Gaza Ireland Coordinator and previously entered Gaza in October 2008 with the Free Gaza Movement.

Jenny Graham is the wife of Free Gaza International Director Derek Graham who was kidnapped in Gazan waters while sailing the Spirit of Humanity in July 2009. Jenny will travel to Gaza on the next mission and plans to stay for six months to carry out humanitarian work.

Since August 2008, the Free Gaza Movement has sailed from Cyprus to the Gaza Strip on several successful voyages, bringing in international witnesses to see first hand the devastating effects of Israeli violence against the Palestinian people. Ours are the first international boats to journey to Gaza since 1967.

The Free Gaza Movement want to break the siege of Gaza. They want to raise international awareness about the prison-like closure of the Gaza Strip and pressure the international community to review its sanctions policy and end its support for continued Israeli occupation.

The Irish Boat is due to arrive in Gaza in January and will have a number of Irish politicians, musicians, journalists and activists on board. It will carry aid to the beleaguered Gaza strip.