On Saturday 14th November the IPSC will hold a National Rally Against Apartheid in Palestine & The Siege of Gaza. We are asking people to assemble at 2pm at the Spire on O'Connell Street and to bring banners, placards etc.

The rally will be followed by at 4pm by a public meeting in The Teachers' Club, Parnell Square, Dublin 1. 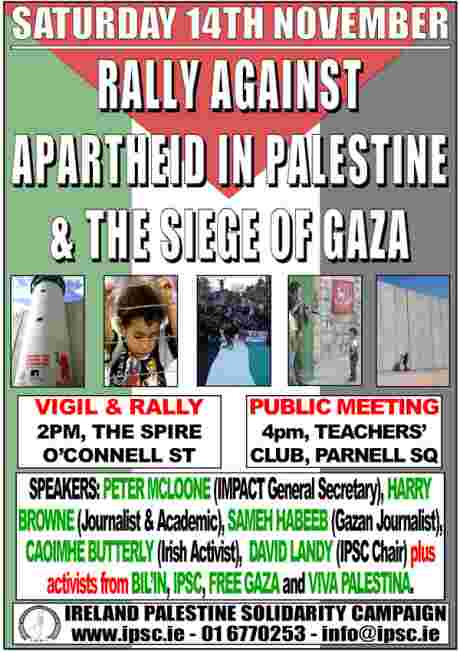 For more information on our speakers see the Speaker Profiles here: http://www.ipsc.ie/wos2009/index.html#speak

The Ireland Palestine Solidarity Campaign will be taking part in this year's International Week of Solidarity called by the Palestinian Grassroots Anti-Apartheid Wall Campaign (http://www.stopthewall.org).

They have called on international activists to launch a week of global mobilisation against the walls of apartheid in Palestine from November 9th to 16th 2009. The IPSC intend to use this opportunity to highlight the necessity of the Boycott, Divestment and Sanctions (BDS) movement, with specific reference to the ongoing role of Irish construction company CRH (formerly Cement Roadstone Holdings) in the building of the Apartheid Wall and illegal colonial settlements in the West Bank.

In addition, we will also be highlighting the ongoing brutal medieval-style siege of Gaza and the devastating aftermath of Israel's winter offensive on the tiny coastal strip which left over 1,400 Palestinians dead and thousands wounded and homeless.

Our aim is to promote as many different voices showing solidarity with the Palestinian people as possible, and to raise awareness among mainstream Irish civil society of Israel's apartheid policies, the ongoing plight of Palestinians, and their heroic struggle to resist ethnic cleansing.

As part of this week we have organised an island-wide itinerary of events including film screenings, public meetings, fundraisers and a National Demonstration in Dublin on 14th November.