As part of the IPSC's Week of Solidarity Against Apartheid Walls in Palestine and Against the Siege of Gaza, the IPSC in association with Viva Palestina and The Workshops Collective are proud to host a film screening and public meeting with Evie Soli and Pete St. John-Jones (activists from the from the International Solidarity Movement in Bil'in), Ger Cassidy (Viva Palestina) and David Landy (Ireland Palestine Solidarity Campaign).

They will be screening the documentary 'Bassem Abu Rahmah - Story of a Martyr'.

The screening/meeting takes places on Friday 13th November at 7pm in the Workshops Collective, 1a Lawrence St, Belfast BT17 1LE. 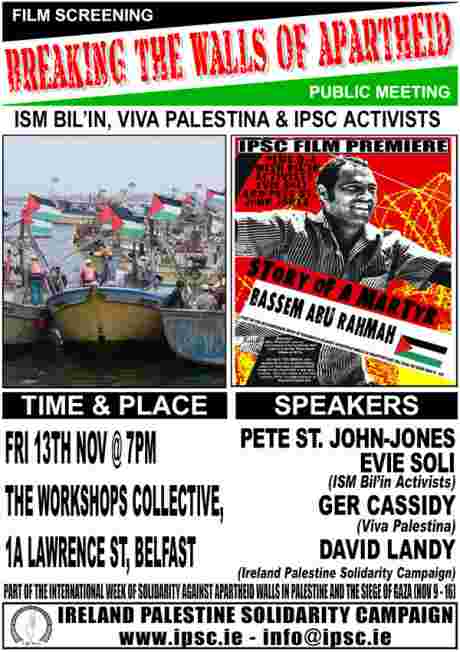 Bassem Abu Rahmah was an non-violent anti-Apartheid Wall activist from the West Bank village of Bil'in. On April 17th 2009 he was murdered by the Israeli military when he was shot at point blank range in the chest with a tear gas cannister. This film looks at the situation in Bil'in through the lense of Bassem's short life.

Bil’in is a Palestinian village situated west of Ramallah in the Occupied West Bank. It is village that is struggling to exist in the face of Israeli land annexation. It is fighting to safeguard its land, its olive trees, its resources, its people and its liberty.

Bil’in has become an international symbol of the Palestinian non-violent popular struggle. For almost five years, its residents have been continuously struggling against the de facto annexation of close to 60% of their farmlands. Their land is being confiscated for the construction of the Apartheid Wall and for the construction of illegal Israeli settlement-colonies. The people of Bil’in live in what amounts to an open air prison. Bil’in has been the scene of gross human rights violations on behalf of the Israeli state – not just against Palestinians, but also Israeli and international activists, journalists and even politicians.

This heroic struggle has been internationally recognised and in 2008 earned the Popular Committee (along with the Israeli group Anarchists Against the Wall) the Carl von Ossietzky Medal for their work in trying to bring about a “realization of the ideals of the Universal Declaration of Human Rights”.

For five years, supported by both Israeli and international activists (including Irish citizens), Bil’in residents - under the banner of the Bil’in Popular Committee - have peacefully demonstrated every Friday in front of what they call the “work-site of shame”. Every Friday the Israeli army responds with violence, both physically and psychologically. Protestors are regularly tear-gassed, sprayed with foul water (so-called ‘skunk-bombs’), subject to the firing of concussion grenades, and shot at by the Israeli military. Many protestors, both Palestinians and internationals, have been severely wounded and one resident Bassem Ibrahim Abu Rahma was killed after being hit full force in the chest with a tear gas canister.

Over the past three months Israeli repression against the people of Bil’in has escalated. No longer are military actions confined to ‘policing’ the Friday demonstrations and the occasional incursion to arrest or harass activists. Since July 2009 there have been regular night-time military raids into Bil’in aimed at cowing the people and destroying the Bil’in Popular Committee. According to British journalist Jody McIntyre, who is based in Bil’in: “The Israeli authorities have arrested members of the Committee as well as teenagers and young boys from the village in order to obtain forced confessions against Committee members.” Raids have taken place on the following dates: June 23rd, 25th, 29th / July 19th, 29th / August 20th / September 5th, 8th, 12th, 21st, 30th. Since the raids began Israeli forces have arrested 28 people (most of whom were under 18). As of September 1st , 21 residents of Bil’in were still being held in Israeli detention.

The construction of Israel’s wall in the West Bank was declared illegal by the International Criminal Court on July 9th 2004.

In a celebrated decision, the Israeli Supreme Court ruled on the 4th September 2007, that the current route of the wall in Bil’in was illegal should be dismantled. Unfortunately, this ruling has never been implemented. Furthermore, according Michael Sfard, the lawyer representing the village: “The Israeli supreme court has ruled 3 times that the route of the Wall is illegal and needs to be moved. However, to date not a meter of the Wall has been rerouted”.

On 25th June 2009 the village of Bil’in took two companies registered in Canada - Green Park International & Green Mount International - to court for participating in war crimes by building settlements on Bil’in’s land under the 2000 Canadian Crimes Against Humanity and War Crimes Statute (which incorporates both the articles of the Fourth Geneva Convention and the Rome Statute into Canadian federal law). According to Bil’in’s attorney Emily Schaeffer, the judge Justice Louis-Paul Cullen is meant to give a decision very soon about whether the Canadian court has jurisdiction to hear Bil’in’s claims.