Most Syrians back President Assad, but you'd never know from western media 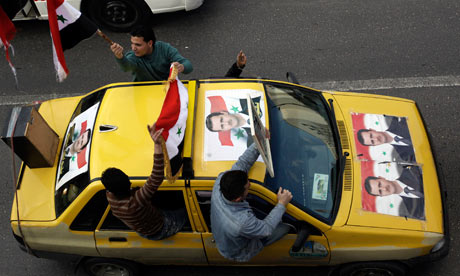 A demonstration in support of Bashar al-Assad, the Syrian president, in Damascus. 'Some 55% of Syrians want Assad to stay, motivated by fear of civil war.' Photograph: Hussein Malla/AP

Suppose a respectable opinion poll found that most Syrians are in favour of Bashar al-Assad remaining as president, would that not be major news? Especially as the finding would go against the dominant narrative about the Syrian crisis, and the media considers the unexpected more newsworthy than the obvious.

Alas, not in every case. When coverage of an unfolding drama ceases to be fair and turns into a propaganda weapon, inconvenient facts get suppressed. So it is with the results of a recent YouGov Siraj poll on Syria commissioned by The Doha Debates, funded by the Qatar Foundation. Qatar's royal family has taken one of the most hawkish lines against Assad – the emir has just called for Arab troops to intervene – so it was good that The Doha Debates published the poll on its website. The pity is that it was ignored by almost all media outlets in every western country whose government has called for Assad to go.

An uncertain future for Syria's revolution

For a longer version of this piece go to www.socialistworker.co.uk

Yet when I arrived at Damascus airport in December, I saw little sign of the revolution. I had left Syria a year earlier, a couple of months before the uprising started. Back then there was just the one big portrait of President Bashar al-Assad. Now the airport was full of Assad portraits, even in the little cabinets where police officers sit to stamp passports.

Damascus, the Syrian capital, is considered one of the major bases for the regime. I was heading to my home city of Salamiyah. It is located near Homs and Hama—the two major cities to revolt against the regime. I passed four military checkpoints between Homs and Salamiyah, fully equipped with heavy arms and tanks. The place seemed like a battlefield.

At one point soldiers boarded my bus and searched it very thoroughly. They weren’t looking for terrorists or dissidents. They were searching for young men born in 1992 to immediately conscript them into compulsory military service.

This new generation of young men are refusing to military service because they don’t want to kill their own people, and neither do they want to die at the hands of the armed elements of the uprising. This is especially true for youths from the revolution’s hotspots: Homs, Hama, Deir ez-Zor and Idlib.

On reaching Salamiyah I felt a freedom that I’d never previously experienced in my life. The people that I knew had transformed themselves in the space of less than a year.

Syria: 20 miles from Damascus, an oasis of fragile freedom
Zabadani has effectively been liberated for a month, thanks to the Free Syrian Army. But it's a liberty under constant siege

A member of the Free Syrian Army stands guard over Zabadani, which has become a hub of revolt against President Bashar al-Assad's rule. Photograph: Reuters TV/Reuters
In the centre of Zabadani, in the little square by the mosque, stands what at first glance looks like a Christmas tree – a spindly plastic evergreen draped in blue fairy lights. But instead of tinsel and baubles it is decorated with photographs and pieces of cardboard bearing the names of the martyrs of the Syrian uprising. Locals call it the Freedom Tree.

It is here, after prayers, that hundreds of residents gather every evening to march through the town, waving placards and chanting slogans against President Bashar al-Assad. They do so under the watchful eyes of the Free Syrian Army (FSA), their only defence against the might of an angry government that is fighting for its survival.

"We don't want Bashar or [his brother] Maher or their gang," they shouted in unison on a cold and starry night last week, clapping their hands above their heads – partly, some laughed, just to keep warm. "The people want the fall of the regime."

Parents and children gathered on the square to pose for the cameras they see as a lifeline to the outside world. Women stood to one side at first but joined the march from the rear. "The Free Army is protecting us against Assad's gangs," read a poster one little boy was holding up. "YouTube is the most important weapon of our revolution," said Amjad al-Khousi, a student. "People believe that being photographed will protect them."

Syria: beyond the wall of fear, a state in slow-motion collapse
Despite the superficial calm in Damascus, everyone knows change is coming. The only question is, how much will it cost?

Members of the Free Syrian Army demonstrate against Bashar al-Assad near Idlib. Photograph: Handout/Reuters
Sipping tea in a smoky Damascus cafe, Adnan and his wife, Rima, look ordinary enough: an unobtrusive, thirtysomething couple winding down at the end of the working day in one of the tensest cities in the world.

But like much else in the Syrian capital, they are not what they first seem: normally, he is a software engineer and she a lawyer; now, they are underground activists helping organise the uprising against President Bashar al-Assad.

It is dangerous work. Over the past 10 months, thousands of Syrians have been killed – perhaps twice the 5,000 figure given by the UN – as Assad has pursued a ruthless crackdown that shows no sign of ending. But his opponents are equally determined to carry on.

Adnan and Rima are unable to work or contact their families. They have false identities. Adnan changes his appearance regularly. He has just shaved off his beard. It clearly works: a friend at a nearby table fails to recognise him.

Most of their friends are on the run from the mukhabarat secret police. "It used to be scary but we've got used to it," said Adnan. The revolution destroyed the wall of fear. At school, we were taught to love the president – Hafez – first. And it didn't get any better when Bashar took over. Now, everything has changed. Assad's picture is defaced everywhere and we are certain that at some point we will topple the regime."

20/12/2011  Syrian troops have attacked a northern town, killing at least 23 civilians, activists say. The activists said the town of Kfar Owaid in the northwestern province of Idlib was hit with heavy machine gun fire or shells. The British-based Syrian Observatory for Human Rights says 23 people were killed in the area, while another activist group, the Local Coordination Committees put the death toll at 25.
Both groups said people were wounded.

The northern province of Idlib has witnessed intense clashes between Syrian troops and army defectors in the past weeks. Yesterday, security forces killed up to 70 army defectors as they were deserting their military posts in Idlib near the Turkish border, activists said.

Syrian troops battled army defectors today in clashes that left several military vehicles in flames. The fighting and other violence around the nation killed at least 5 people, activists said.

For the first time protest against President Bashar Assad's regime spilled across the border into Jordan, where about a dozen Syrians attacked their embassy in the capital, Amman, wounding at least 2 diplomats and 4 other consulate employees.

The 9 month-old uprising against Syria's authoritarian President Bashar Assad has grown increasingly violent in recent months as once-peaceful protesters take up arms and rebel soldiers joining the uprising fight back against the army. The UN says more than 4,000 people have been killed since March.

Opposition activists called for a general strike starting today to add to the pressure on the government to stop its bloody crackdown. Assad has refused to buckle under Arab and international pressure to step down and has shown no signs of easing his crackdown, which has included assaults by the military on unarmed protesters.

Now, fighting between loyalist forces and defectors calling themselves the Free Syrian Army threatens to push the confrontation into civil war.

Syrian activist, Anas al-Shogre, who has been detained incommunicado since May, apparently for calling for and leading protests in the coastal city of Banias, is now believed to be held at a State Security branch in the capital Damascus. Reports suggest that he is in poor health and may have been subjected to torture or other ill-treatment.

One of Anas al-Shogre’s brothers, who is living outside Syria, has told Amnesty International that the family have learnt from an apparently reliable source that Anas al-Shogre is currently held at the State Security branch in Damascus, that he is unwell and “has lost a lot of weight”. This has heightened concern that he may have been subjected to torture and other ill-treatment. The source reportedly provided no further information.

Anas al-Shogre, a 23-year old student, was arrested during a security forces operation that began in Banias on 7 May. He was in hiding at the time. The Syrian authorities have not disclosed the reason for his arrest or where he is being held although, according to his brother, his family have made relentless efforts to obtain information about him.

Anas al-Shogre’s family and local human rights activists believe that his arrest is related to his involvement in calling for and leading popular protests in the city of Banias, and for informing the media, including the BBC’s Arabic Service, about human rights violations committed in the city by Syrian security forces. Amnesty International believes that Anas al-Shogre may be a prisoner of conscience, detained solely for peacefully exercising his rights to freedom of expression and assembly, and is concerned that he is being held in conditions that amount to enforced disappearance.

Syrian death squads are killing protesters in their hospital beds, whilst Russia arms the regime and blocks international action to end the carnage. But pressure is building in the region, and if enough of us speak out now, we could persuade Turkey and Germany to use their leverage to get Russia to stop propping up this murderous regime. Join me, sign the urgent petition and tell everyone: