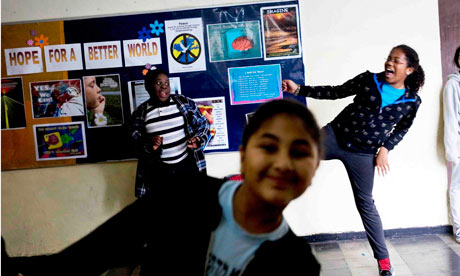 Children of African migrants play inside the Bialik-Rogozin school in Tel Aviv, Israel, in February 2011. Pupils at the school have survived genocide, war and famine. But they were all smiles after learning that a documentary about their plight then eventual safety and asylum in Israel, Strangers No More, had won an Oscar. An Israeli academic is claiming that Israeli schools are racist. Photograph: Ariel Schalit/AP

Nurit Peled-Elhanan, an Israeli academic, mother and political radical, summons up an image of rows of Jewish schoolchildren, bent over their books, learning about their neighbours, the Palestinians. But, she says, they are never referred to as Palestinians unless the context is terrorism.

They are called Arabs. "The Arab with a camel, in an Ali Baba dress. They describe them as vile and deviant and criminal, people who don’t pay taxes, people who live off the state, people who don’t want to develop," she says. "The only representation is as refugees, primitive farmers and terrorists. You never see a Palestinian child or doctor or teacher or engineer or modern farmer."

Peled-Elhanan, a professor of language and education at the Hebrew University of Jerusalem, has studied the content of Israeli school books for the past five years, and her account, Palestine in Israeli School Books: Ideology and Propaganda in Education, is to be published in the UK this month. She describes what she found as racism– but, more than that, a racism that prepares young Israelis for their compulsory military service.

"People don’t really know what their children are reading in textbooks," she said. "One question that bothers many people is how do you explain the cruel behaviour of Israeli soldiers towards Palestinians, an indifference to human suffering, the inflicting of suffering. People ask how can these nice Jewish boys and girls become monsters once they put on a uniform. I think the major reason for that is education. So I wanted to see how school books represent Palestinians."

In "hundreds and hundreds" of books, she claims she did not find one photograph that depicted an Arab as a "normal person". The most important finding in the books she studied – all authorised by the ministry of education – concerned the historical narrative of events in 1948, the year in which Israel fought a war to establish itself as an independent state, and hundreds of thousands of Palestinians fled the ensuing conflict.

The killing of Palestinians is depicted as something that was necessary for the survival of the nascent Jewish state, she claims. "It’s not that the massacres are denied, they are represented in Israeli school books as something that in the long run was good for the Jewish state. For example, Deir Yassin [a pre-1948 Palestinian village close to Jerusalem] was a terrible slaughter by Israeli soldiers. In school books they tell you that this massacre initiated the massive flight of Arabs from Israel and enabled the establishment of a Jewish state with a Jewish majority. So it was for the best. Maybe it was unfortunate, but in the long run the consequences for us were good."

Children, she says, grow up to serve in the army and internalise the message that Palestinians are "people whose life is dispensable with impunity. And not only that, but people whose number has to be diminished."

Peled-Elhanan approaches her subject from a radical political background. She is the daughter of a famous general, Matti Peled, who became convinced that Israel’s future lay in a dignified peace with the Palestinians. After leaving the army, he became active in the peace movement.

The family produced a poster, calling for a peaceful settlement to the conflict, featuring Peled-Elhanan’s only daughter, Smadar. It’s message was that all children deserve a better future.

Then, in 1997, Smadar was killed by a Palestinian suicide bomber while shopping in Jerusalem. She was 13. Peled-Elhanan declines to talk about her daughter’s death apart from once or twice referring to "the tragedy".

At the time, she said that it would strengthen her belief that, without a settlement to the conflict and peaceful coexistence with Palestinians, more children would die. "Terrorist attacks like this are the direct consequence of the oppression, slavery, humiliation and state of siege imposed on the Palestinians," she told TV reporters in the aftermath of Smadar’s death.

Her radical views have exacted a professional cost. "University professors stopped inviting me to conferences. And when I do speak, the most common reaction is, ‘you are anti-Zionist’." Anybody who challenges the dominant narrative in today’s Israel, she says, is similarly accused.

She hopes her book will be published in Hebrew, but is resigned to it being dismissed by many in the political mainstream.

Asked if Palestinian school books also reflect a certain dogma, Peled-Elhanan claims that they distinguish between Zionists and Jews. "They make this distinction all the time. They are against Zionists, not against Jews."

Perhaps not surprisingly for someone of such radical views, Peled-Elhanan is deeply pessimistic about her country’s future. Change, she says, will only come "when the Americans stop providing us with $1m a day to maintain this regime of occupation and racism and supremacy".

She said that within Israel, "I only see the path to fascism. You have 5.5 million Palestinians controlled by Israel who live in a horrible apartheid with no civil and no human rights. And you have the other half who are Jews who are also losing their rights by the minute," she says, in reference to a series of attempts to restrict Israelis’ right to protest and criticise their government.

She dismisses the Israeli left as always small and timid, but especially now. "There has never been a real left in this country." She believes that the education system helps to perpetuate an unjust, undemocratic and unsustainable state.

"Everything they do, from kindergarten to 12th grade, they are fed in all kinds of ways, through literature and songs and holidays and recreation, with these chauvinistic patriotic notions."

• This article was amended on 7 August 2011. The original credited Matti Peled as the designer of a poster featuring Nurit Peled-Alhanan’s daughter, Smadar. It was in fact Rami Alhanon, Smadar’s father, who designed the poster.