Bahrain protests: ‘The repression is getting worse’ – Guardian – 090811

Bahrain protests: ‘The repression is getting worse’

Months after its brief exposure to the Arab spring, Bahrain’s cat-and-mouse routine of protest and repression continues

Bahrain protests: ‘The repression is getting worse’

Months after its brief exposure to the Arab spring, Bahrain’s cat-and-mouse routine of protest and repression continues 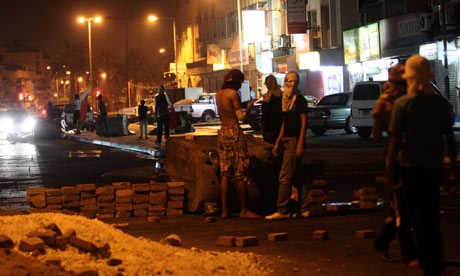 Masked youths in the village of Daih, Bahrain, protest against the government from behind makeshift barriers. Photograph: Hasan Jamali/AP

Hassan Ali Salman is a stocky, fit-looking young man. But he flailed in vain as the police officers grabbed him, one forcing his T-shirt roughly up over his head as three or four others laid in with their wooden batons, dragging and pushing him to a line of waiting Land Cruisers and more helmeted cops.

Behind him, on a bare breezeblock wall, crudely drawn nooses encircle the names Hamad and Khalifa – in reference to the king of Bahrain and his uncle the prime minister – alongside graffiti demanding their execution and the overthrow of the regime.

The recent scene in Sitra, a short drive from central Manama, the capital, provided an ugly glimpse into the cat-and-mouse routine of protests and repression in this Gulf island state. Filmed secretly, posted on YouTube and distributed on Twitter, it exposes what Bahrain’s western-backed government prefers foreigners not to see.

In the nearby cemetery lies the grave of Zainab al-Juma, a disabled woman who died in July after inhaling tear gas from a police grenade. The black flag that marks her "martyrdom" hangs limp in the hot, still air. Another local victim was Ahmed Farhan, shot in March, his brains spilling out of his shattered head live on camera as horrified screams sounded all around.

Bahrain is far quieter now than during its brief exposure to the winds of the Arab spring in February and March, but unrest continues. Every night cries of "Allahu Akbar" (God is greatest) echo through the villages of a Shia underclass that has chafed under the Sunni Al Khalifa dynasty since the country’s independence from Britain in 1971.

"We go up on to the roofs and shout and then try to march to the entrance of our village," said Abu Ali, a thirtysomething accountant and former prisoner from Karzakan who supports al-Wifaq, the Islamist movement demanding democracy and equal rights for all. "The repression is getting worse."

Haydar, from nearby Diraz, described a savage beating, curses and threats of rape as he was forced to kiss the boots of the police officers who tormented him on 26 June. "They pulled my shirt over my head and every hundred metres they hit me in the face and kicked me," he said.

Captain Ahmed of Manama’s police special forces unit insists his job is simply to "protect citizens" and that he and his men are reluctant to make arrests or use force. "If we catch someone they are in trouble," he said. "They can lose their job or be thrown out of their studies and that will be on their files for good. Of course we take action if they try to harm us."

The night the Guardian joined his four-vehicle patrol the radio network reported small crowds gathering but there were no beatings or shootings. Young men waiting in the shadows in Sanabis, part of a Shia "triangle of steadfastness", ran off when the Land Cruisers roared up, blue lights flashing as the police officers scrambled out, helmet visors down, to demolish the makeshift roadblocks, their gas grenade launchers at the ready.

"It’s not just kids," a police lieutenant said. "They are organised quite professionally with co-ordinated actions in different places at the same time." Still, this is basically a public order problem, not a war or – despite the brave rhetoric – a Palestinian-style intifada. Ahmed hopes Bahraini municipalities will respond to police requests to remove the wheels from rubbish bins to stop them being used to barricade roads.

Central Manama is calm. Pearl Roundabout in the commercial heart of the city has been wiped off the map, its famous statue has been destroyed and the only clue to its status as Manama’s "Tahrir Square" are two or three armoured cars and a refuse cart emblazoned with the name of a radical Shia leader, Hassan Mushayma, a bogeyman for the regime and for Sunnis.

Yet underlying tensions remain. Pearl has been renamed Farouq junction, an epithet attached to the seventh-century Sunni Caliph Omar and bitter rival of Ali, the founder of Shia Islam. It’s one of the signifiers of dominance and prejudice that are part of the sectarian fabric of Bahraini life. Another is that state TV broadcasts only the Sunni call to prayer.

Sheikh Ali Salman, al-Wifaq’s leader, prefers to talk of universal rights. "What Bahrainis want is the same as people elsewhere in the Arab world," he said. "The government succeeded to some extent in portraying what happened here as a Shia-Sunni clash, though it was less successful in convincing anyone that there was Iranian involvement. It also tried to show that the opposition were terrorists. But there is one basic conflict – between those who support democracy and those who want to maintain the current dictatorship."

Al-Wifaq withdrew its 18 members from the 40-seat parliament in protest at the first killings of demonstrators in February, but remains committed to peaceful change. Enemies dismiss its moderate image and claim it is no different from Shia hardliners such as Mushayma, who called for a republic to replace the Al Khalifa dynasty, launched a campaign of civil disobedience and destroyed a dialogue between the opposition and the reformist Crown Prince Salman that might – just – have defused the crisis.

The crackdown began in earnest on 15 March when most foreign journalists had been thrown out or diverted to Libya.

"It was an anti-Shia pogrom," said Hala, an activist who helped plan the Pearl Roundabout protests. "Arrests began at two or three in the morning. People were dragged out of bed by armed men in ski masks and their houses smashed up. The Mukhabarat [secret police] set up a Twitter account and named people as traitors so that when they tried to leave the country they were picked up." Hundreds remain in prison.

Dismissals of some 2,000 people who stayed away from work during the unrest began at the same time. The destruction of around 30 Shia mosques has sharpened the sense of sectarian polarisation.

Under pressure from the US, trials have been moved from military to civilian courts and two al-Wifaq MPs and a lawyer were freed at the weekend amid signs that more detainees would be released. But doctors and nurses from the Salmaniya hospital still face charges of occupying the building, hiding weapons, refusing to treat Sunni patients and inciting protests.

Sunnis talk of boycotting Shia shops and Shia night workers complain of being stopped by police on their way home. "Even among lawyers there are tensions," said a Sunni who defends Shia clients. "I am very pessimistic," sighed Jassim, a Shia taxi driver whose startling cockney accent is a souvenir of years of work at the RAF base on Muharraq. "Things are much worse then before." Shia journalists are smeared as traitors and fear harassment or worse if they cover Sunni events.

"It’s been a big setback for all of us in Bahrain," concluded Munira Fakhro, a Sunni member of the secular opposition Wa’ad party, whose leader Ibrahim Sharif is also behind bars. "We will either come out safe despite our wounds or the situation will deteriorate further." Another middle-class professional woman reflected gloomily: "We sank very low. If we go any further people will start to leave. We were tearing ourselves apart."

Two things seem certain: repression without reform will not solve Bahrain’s problems and its citizen journalists will keep the story alive. "They are doing our job for us," said a local photographer who works for international news agencies. "They set up webcams in the villages where there are clashes. It’s hard to get in and if you do you risk being arrested or hit by a tear gas grenade or worse. If the police catch you they make you erase your pictures. It happened to me once. After all, they are the ones with the guns."

Some names in this report have been changed