Many Western politicians, among them Cheney, Brown and Miliband and much of the Western media would have us believe that Russia is the aggressive imperialist power and that the US and other Western powers are defending Georgian democracy against outside invasion, with a nonchalant NATO observing from the sidelines as a force for calm in the world. The truth is more complex if not totally contrary to this view.

Many Western politicians, among them Cheney, Brown and Miliband and much of the Western media would have us believe that Russia is the aggressive imperialist power and that the US and other Western powers are defending Georgian democracy against outside invasion, with a nonchalant NATO observing from the sidelines as a force for calm in the world. The truth is more complex if not totally contrary to this view. While the nature and extent of the Russian military response to the apparently unprovoked attack by Saakashvili’s military on South Ossetia is highly questionable, it is the sinister, creeping enlargement of NATO along the borders of Russia that has provoked this conflict.

It must be emphasized that it was actually Georgia that began the war last Thursday with an all-out attack on South Ossetia to "restore constitutional order" and "fight the bandits" – in other words, rule over an area it has never controlled since the collapse of the Soviet Union. Nor, amid the political and media outrage at Russian bombardments, have there been much more than the briefest references to the atrocities committed by Georgian forces against citizens it claims as its own in South Ossetia’s capital Tskhinvali. Several hundred civilians were killed there by Georgian troops last week, along with Russian soldiers operating under a 1990s peace agreement

You’d be hard put to recall after all the fury over Russian aggression that it was actually Georgia that began the war with an all-out attack on South Ossetia to "restore constitutional order" – in other words, rule over an area it has never controlled since the collapse of the Soviet Union. Nor, amid the outrage at Russian bombardments, have there been much more than the briefest references to the atrocities committed by Georgian forces against citizens it claims as its own in South Ossetia’s capital Tskhinvali. Several hundred civilians were killed there by Georgian troops along with Russian soldiers operating under a 1990s peace agreement More civilians lost their lives when the Russians came in.

As always in wars, civilians are the main victims, while the promoters of the armaments industry are the primary winners. Both the US and Russian Governments care little about the needs of the people caught in the middle of this war as they practice their Cold War type brinkmanship to the benefit only of their respective industrial military complexes.

The Expanding Theatre of War

The conflict in Georgia is inextricably connected to the US-led, falsely labelled “war on terror” being conducted in Afghanistan, Iraq and Somalia – now threatening to engulf Iran – and which has become George Bush’s steadily expanding theatre of war right up to the borders of the Russian state.  Leaving aside the hypocrisy of the US, whose illegal occupation of both Iraqand Afghanistan continues, US support for Georgia is driven, not by a desire to spread democracy, but by the need to gain control of strategic regions and natural resources. The US Government paid almost a billion dollars to have the Baku-Tbilisi-Ceyhan oil pipeline built, thus ensuring it ended in Turkey and hence under US control, as opposed to the shorter, efficient route of Baku-Tbilisi-Suspa which would have favoured Russia. 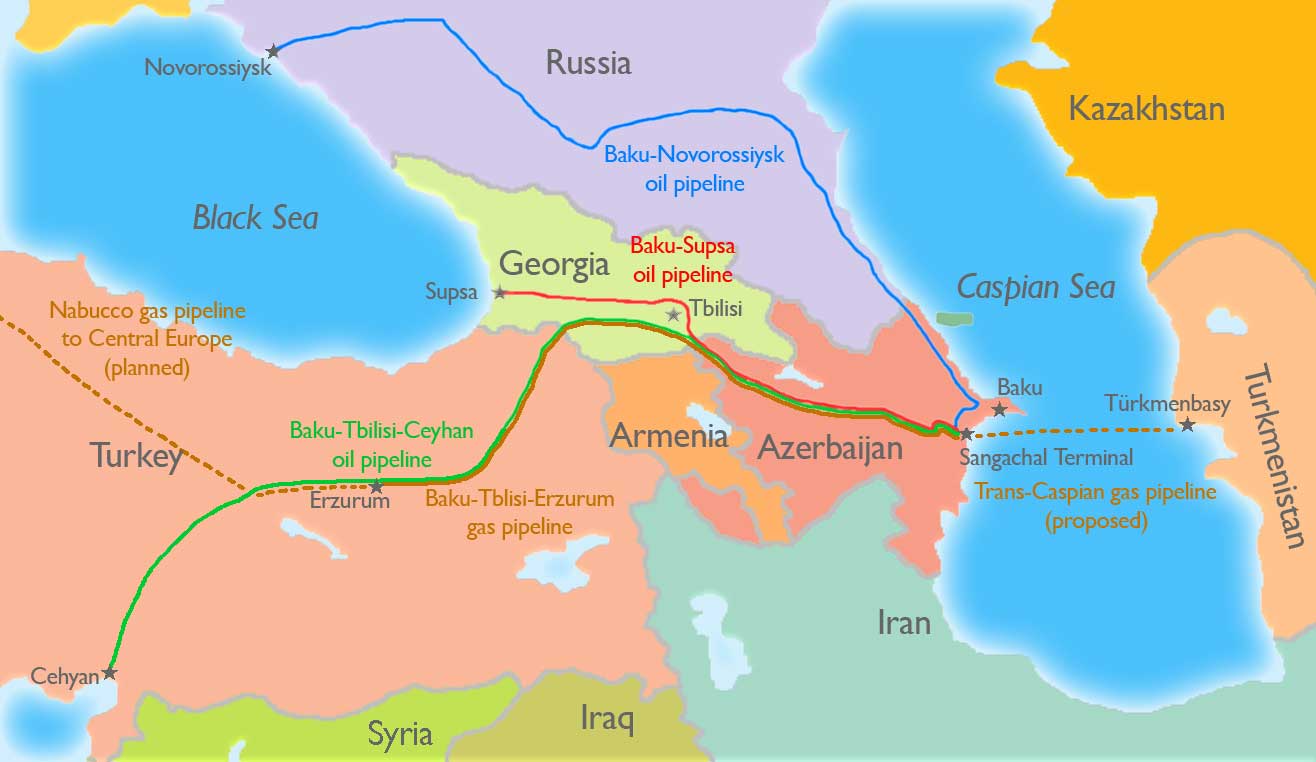 Israel, which brutally occupies Palestinian lands, also has a role in the Georgia conflict. Jerusalem wants Caspian oil and gas pipelines to reach the Turkish terminal port of Ceyhan, rather than the Russian network. Intense negotiations are afoot between Israel, Turkey, Georgia, Turkmenistan andAzerbaijan for pipelines to reach Turkey and thence to Israel’s oil terminal at Ashkelon and on to its Red Sea port of Eilat.

Since Georgia emerged as an independent state, US and Israeli military advisers have become deeply embedded there in attempts to fashion it as a client state to serve their interests in the region. The Harvard educated Saakashvili, who is a US citizen, and the Georgian leadership are closely linked with the neo-cons in the Pentagon. Georgia has sent no less than €0.9 billion to Randy Scheunemann, McCain’s top policy adviser, over the past few years. Georgia’s forces are armed and trained by the US and Israel and the US is also training Georgian troops in the Pankisi Gorge bordering Chechnya.

Last year, the Georgian President commissioned from private Israeli security firms an estimated 1,000 military advisers to train the Georgian armed forces in commando, air, sea, armoured and artillery combat tactics. They also offer instruction on military intelligence and security for the Tbilisi regime. Tbilisi also purchased weapons, intelligence and electronic warfare systems from Israel. These advisers were quite probably involved in the Georgian army’s preparations to conquer the South Ossetian capital on 8 August. Moscowrepeatedly demanded that Jerusalem halt its military assistance to Georgia, finally threatening a crisis in bilateral relations. Israel responded by saying that the only assistance rendered Tbilisi was "defensive."

In return for US favours, Georgia has sent 2,500 troops to bolster the illegal occupation of Iraq. It is the single biggest contingent in the occupying forces after the US and Britain – hence the US need to airlift 800 of them back to fight the Russians last week.

The IAWM opposes the way in which Russia is using the extension of the ‘war on terror’ to suppress separatist forces within its own borders – the obvious case being the horrific destruction in Chechnya. However, it is the US that has escalated this conflict by seeking to extend its influence in the Caucasus, with its constant meddling in Georgia and its offer last April for it to become a member of NATO. Bush, during the recent NATO meeting in Bucharest, pressed the other NATO powers to place Georgia’s application for membership on the fast track. The European leaders rejected the idea, understanding the geo-strategic implications of pushing NATO’s boundaries right up to Russia’s border. If they had let Bush have his way, NATO states would have been obligated to send troops in Georgia’s defence. A World War could have so quickly developed. The fact that this situation escalated so quickly to invasions and bombings is a reminder of just how dangerous the world has become.

The manufacturing early this year of the independence of Kosovo by the US, supported by most EU member states, further escalated tensions with Russia.  Last week’s Georgian-Russian conflict allowed the US to bully the Polish Government into accepting a missile defence shield along Russia’s border, against the wishes of the majority of it population. This can only be seen as an aggressive threat by the US reminiscent of the worst days of the Cold War, likely to provoke an equally questionable response by Russia.

Though divided on tactics, EU leaders are generally supportive of the US plans. Condoleezza Rice persuaded Georgian president Saakashvili to sign a French-negotiated ceasefire that would lead to the withdrawal of Russian forces. George Bush has ordered humanitarian supplies to be delivered to Tbilisi on US military aircraft, saying that the US expected Russia to allow humanitarian supplies into Georgia and to ensure that all lines of communication and transport remain open.

The Independent of Aug 21, in a piece signed by Fergus Black, informed its readers that Ireland’s Rapid Response Corps was on standby to join an EU ‘humanitarian mission’ to deal with the crisis in Georgia. The corps, run by the Irish Aid division of the Department of Foreign Affairs, was set up last year to deploy at short notice to humanitarian emergencies anywhere in the world. Micheal Martin has said that it will be providing humanitarian assistance to ease the crisis in Georgia. We should not be so naïve as to think that this aid is value-free – it will be under the umbrella of the US Military and NATO.

As succinctly put by our comrades of the Galway Alliance Against the War (GAAW) yesterday, “we believe the Irish people should not ignore this conflict in the Caucasus……it could have implications for Ireland if the Lisbon Treaty is ever forced upon us. Under the Lisbon Treaty, all EU countries, including Ireland, would be obliged to come to the aid of other EU states that are attacked. Georgia has already applied for EU and NATO membership, so this is a predicament we could face in the future if the Lisbon Treaty becomes a reality”.