Why do we still go to war? We seem unable to stop. We find any excuse for this post-imperial fidget and yet we keep getting trapped. Germans do not do it, or Spanish or Swedes. Britain’s borders and British people have not been under serious threat for a generation. Yet time and again our leaders crave battle. Why?

Why do we still go to war? We seem unable to stop. We find any excuse for this post-imperial fidget and yet we keep getting trapped. Germans do not do it, or Spanish or Swedes. Britain’s borders and British people have not been under serious threat for a generation. Yet time and again our leaders crave battle. Why?

Last week we got a glimpse of an answer and it was not nice. The outgoing US defence secretary, Robert Gates, berated Europe’s "failure of political will" in not maintaining defence spending. He said Nato had declined into a "two-tier alliance" between those willing to wage war and those "who specialise in ‘soft’ humanitarian, development, peacekeeping and talking tasks". Peace, he implied, is for wimps. Real men buy bombs, and drop them.

This call was echoed by Nato’s chief, Anders Fogh Rasmussen, who pointed out how unfair it was that US defence investment represented 75% of the Nato defence expenditure, where once it was only half. Having been forced to extend his war on Libya by another three months, Rasmussen wanted to see Europe’s governments come up with more money, and no nonsense about recession. Defence to him is measured not in security but in spending. 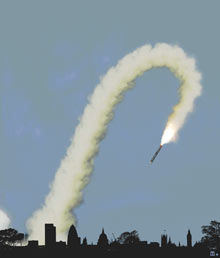 The call was repeated back home by the navy chief, Sir Mark Stanhope. He had to be "dressed down" by the prime minister, David Cameron, for warning that an extended war in Libya would mean "challenging decisions about priorities". Sailors never talk straight: he meant more ships. The navy has used so many of its £500,000 Tomahawk missiles trying to hit Colonel Gaddafi (and missing) over the past month that it needs money for more. In a clearly co-ordinated lobby, the head of the RAF also demanded "a significant uplift in spending after 2015, if the service is to meet its commitments". It, of course, defines its commitments itself.

Libya has cost Britain £100m so far, and rising. But Iraq and the Afghan war are costing America $3bn a week, and there is scarcely an industry, or a state, in the country that does not see some of this money. These wars show no signs of being ended, let alone won. But to the defence lobby what matters is the money. It sustains combat by constantly promising success and inducing politicians and journalists to see "more enemy dead", "a glimmer of hope" and "a corner about to be turned".

Victory will come, but only if politicians spend more money on "a surge". Soldiers are like firefighters, demanding extra to fight fires. They will fight all right, but if you want victory that is overtime.

On Wednesday the Russian ambassador to Nato warned that Britain and France were "being dragged more and more into the eventuality of a land-based operation in Libya". This is what the defence lobby wants institutionally, even if it may appal the generals. In the 1980s Russia watched the same process in Afghanistan, where it took a dictator, Mikhail Gorbachev, to face down the Red Army and demand withdrawal. The west has no Gorbachev in Afghanistan at the moment. Nato’s Rasmussen says he "could not envisage" a land war in Libya, since the UN would take over if Gaddafi were toppled. He must know this is nonsense. But then he said Nato would only enforce a no-fly zone in Libya. He achieved that weeks ago, but is still bombing.

It is not democracy that keeps western nations at war, but armies and the interests now massed behind them. The greatest speech about modern defence was made in 1961 by the US president Eisenhower. He was no leftwinger, but a former general and conservative Republican. Looking back over his time in office, his farewell message to America was a simple warning against the "disastrous rise of misplaced power" of a military-industrial complex with "unwarranted influence on government". A burgeoning defence establishment, backed by large corporate interests, would one day employ so many people as to corrupt the political system. (His original draft even referred to a "military-industrial-congressional complex".) This lobby, said Eisenhower, could become so huge as to "endanger our liberties and democratic processes".

I wonder what Eisenhower would make of today’s US, with a military grown from 3.5 million people to 5 million. The western nations face less of a threat to their integrity and security than ever in history, yet their defence industries cry for ever more money and ever more things to do. The cold war strategist, George Kennan, wrote prophetically: "Were the Soviet Union to sink tomorrow under the waters of the ocean, the American military-industrial complex would have to remain, substantially unchanged, until some other adversary could be invented."

The devil makes work for idle hands, especially if they are well financed. Britain’s former special envoy to Kabul, Sherard Cowper-Coles, echoed Kennan last week in claiming that the army’s keenness to fight in Helmand was self-interested. "It’s use them or lose them, Sherard," he was told by the then chief of the general staff, Sir Richard Dannatt. Cowper-Coles has now gone off to work for an arms manufacturer.

There is no strategic defence justification for the US spending 5.5% of its gross domestic product on defence or Britain 2.5%, or for the Nato "target" of 2%.

These figures merely formalise existing commitments and interests. At the end of the cold war soldiers assiduously invented new conflicts for themselves and their suppliers, variously wars on terror, drugs, piracy, internet espionage and man’s general inhumanity to man. None yields victory, but all need equipment. The war on terror fulfilled all Eisenhower’s fears, as America sank into a swamp of kidnapping, torture and imprisonment without trial.

The belligerent posture of the US and Britain towards the Muslim world has fostered antagonism and moderate threats in response. The bombing of extremist targets in Pakistan is an invitation for terrorists to attack us, and then a need for defence against such attack. Meanwhile, the opportunity cost of appeasing the complex is astronomical. Eisenhower remarked that "every gun that is made is a theft from those who hunger" – a bomber is two power stations and a hospital not built. Likewise, each Tomahawk Cameron drops on Tripoli destroys not just a Gaddafi bunker (are there any left?), but a hospital ward and a classroom in Britain.

As long as "big defence" exists it will entice glory-hungry politicians to use it. It is a return to the hundred years war, when militaristic barons and knights had a stranglehold on the monarch, and no other purpose in life than to fight. To deliver victory they demanded ever more taxes for weapons, and when they had ever more weapons they promised ever grander victories. This is exactly how Britain’s defence ministry ran out of budgetary control under Labour.

There is one piece of good news. Nato has long outlived its purpose, now justifying its existence only by how much it induces its members to spend, and how many wars irrelevant to its purpose it finds to fight. Yet still it does not spend enough for the US defence secretary. In his anger, Gates threatened that "future US leaders … may not consider the return on America’s investment in Nato worth the cost". Is that a threat or a promise?