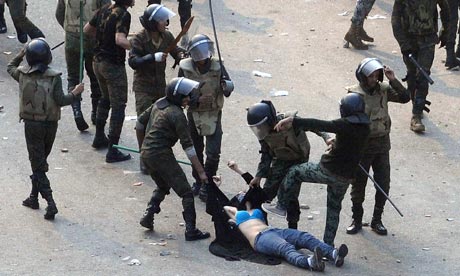 Egyptian soldiers beating and dragging a young woman during clashes in Tahrir Square. Her image has become the latest icon of the revolution. Photograph: Reuters

The woman is young, and slim, and fair. She lies on her back surrounded by four soldiers, two of whom are dragging her by the arms raised above her head. She’s unresisting – maybe she’s fainted; we can’t tell because we can’t see her face. She’s wearing blue jeans and trainers. But her top half is bare: we can see her torso, her tummy, her blue bra, her bare delicate arms. Surrounding this top half, forming a kind of black halo around it, is the abaya, the robe she was wearing that has been ripped off and that tells us that she was wearing a hijab.

Six years ago, when popular protests started to hit the streets of Egypt as Hosni Mubarak’s gang worked at rigging the 2005 parliamentary elections, the regime hit back – not just with the traditional Central Security conscripts – but with an innovation: militias of strong, trained, thugs. They beat up men, but they grabbed women, tore their clothes off and beat them, groping them at the same time. The idea was to insinuate that females who took part in street protests wanted to be groped.

Women developed deterrent techniques: layers of light clothing, no buttons, drawstring pants double-knotted – and carried right on protesting. Many of the smaller civil initiatives that grew into the protest movement: "We See You", "Against Corruption", "The Streets are Ours" were women-led.

But, a symbiotic relationship springs up between behaviours. Mubarak and Omar Suleiman turn Egypt into the US’s favourite location for the torture of "terror suspects" and torture becomes endemic in police stations. The regime’s thugs molest women as a form of political bullying – and harassment of women in the streets rises to epidemic levels.

Until 25 January. The Revolution happened and with it came the Age of Chivalry. One of the most noted aspects of behaviour in the streets and squares of the 18 days of the Egyptian Revolution was the total absence of harassment. Women were suddenly free; free to walk alone, to talk to strangers, to cover or uncover, to smoke to laugh to cry to sleep. And the job of every single male present was to facilitate, to protect, to help. The Ethics of the Square, we called it.

Now our revolution is in an endgame struggle with the old regime and the military.

The young woman is part of this.

Since Friday the military has openly engaged with civilian protesters in the heart of the capital. The protesters have been peacefully conducting a sit-in in Ministries’ Street to signal their rejection of the military’s appointment of Kamal Ganzouri as prime minister.

Ganzouri announced that no violence would be used to break up the Cabinet Office sit-in. Moments later the military took on the protesters. For a week Military Police and paratroopers had kidnapped activists from the streets, driven them off in unmarked vehicles, interrogated them and beaten them. On Friday they kidnapped Aboudi – one of the "Ultras" of the Ahli Football Club. They gave him back with his face so beaten and burned that you couldn’t see features – and started the street war that’s been raging round Ministries’ Street for the last three days.

The protesters have thrown rocks at the military. The military has shot protesters, and thrown rocks, Molotov cocktails, china embossed with official parliament insignia, chairs, cupboards, filing-cabinets, glass panes and fireworks. They’ve dragged people into parliament and into the Cabinet Office and beaten and electrocuted them – my two nieces were beaten like this.

They beat up a newly elected young member of parliament, jeering: "Let parliament protect you, you son of … ". They took a distinguished older lady who’s become known for giving food to the protesters and slapped her repeatedly about the face till she had to beg and apologise. They killed 10 people, injured more than 200, and they dragged the unconscious young woman in the blue jeans – with her upper half stripped – through the streets.

The message is: everything you rose up against is here, is worse. Don’t put your hopes in the revolution or parliament. We are the regime and we’re back.

What they are not taking into account is that everybody’s grown up – the weapon of shame can no longer be used against women. When they subjected young women to virginity tests one of them got up and sued them. Every young woman they’ve brutalized recently has given video testimony and is totally committed to continuing the struggle against them.

© Ahdaf Soueif 2011. Ahdaf Soueif’s Cairo: My City, Our Revolution is published by Bloomsbury in January