In 2005, while a law student at the University of Miami, Mahvish Rukhsana Khan decided to volunteer as an interpreter for Afghan detainees at Guantánamo Bay. The American daughter of Afghan immigrants (her parents are Johns Hopkins-educated physicians), Khan thought it unfair that the detainees could not understand their lawyers, who did not speak Pashto, and although she didn’t know whether they were guilty, she believed they were entitled to prove their innocence. 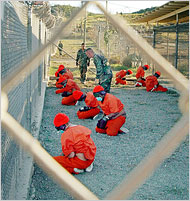 The Detainees and the Stories They Told Me. By Mahvish Rukhsana Khan.

But after more than three dozen visits to the Guantánamo prison camp, Khan writes, “I came to believe that many, perhaps even most” of the detainees were “innocent men who’d been swept up by mistake.” A number of the men she met insisted they had been sold to the United States by bounty hunters, after the American military dropped leaflets across Afghanistan promising up to $25,000, or nearly 100 times the annual per capita income, to anyone who would turn in members of the Taliban or Al Qaeda.

I began “My Guantánamo Diary” wondering whether Khan was too credulous, especially after she conceded that “it may appear to some readers that I gave ample, and perhaps naïve, credence to the prisoners’ points of view.” But by the end, I was more or less persuaded by her conclusion that most of the Afghans she met were not guilty of crimes against the United States, and for a simple reason: the military ultimately released most of them.

Once you know the endings to Khan’s stories, they read like the gripping narratives of the wrongly accused. There is Ali Shah Mousovi, a pediatrician who says he returned to Afghanistan in 2003, following years of exile in Iran, to open a medical clinic and rebuild his country. Soon after his return, American soldiers broke down his door, accused him of associating with the Taliban and took him to the Bagram Air Base. There, he says, he was blindfolded, hooded, gagged and repeatedly kicked in the head by American soldiers, who spat on him, cursed him and paraded him naked.

Flown to Guantánamo, he had to wait a year and a half for a hearing, where he was told the evidence against him was classified and was denied the right to call witnesses in his defense. He believed he had been sold by bounty-hunting political opponents, and as a Shiite Muslim was viewed by the Taliban as an infidel. “It’s still not clear to me what I am being charged with,” he told his silent judges. Finally, after three years of numbing boredom and petty humiliations at Guantánamo prison, Mousovi was released and returned to a tearful reunion with his family in Iran.

There is Haji Nusrat Khan, a detainee around 80 years old, who hobbles on a walker after having suffered a stroke. In Afghanistan in 2003, he went to the American authorities to complain about the arrest of his son; days later, Nusrat himself was arrested, beaten at the Bagram Air Base and sent to Guantánamo — turned in, he said, by a bounty hunter. Accused, like his son, of harboring a cache of weapons, he claimed that he and his son were supporters of the American-backed Karzai government, which had paid them to guard arms seized from the Soviets. In an intrepid and suspenseful chapter, Khan travels to Afghanistan to visit the family of another detainee and to bring back a home video of his family; later, when she returns to Guantánamo and shows Nusrat’s son a similar home video of his children, he weeps. Nusrat was released in 2006.

Other Afghan detainees who languished for years at Guantánamo before being freed include a goatherd who was turned over to the Americans by his cousin after they quarreled and two poetry-writing members of the Pakistani opposition, who were turned in by their political rivals and repeatedly questioned at Guantánamo about a joke they had told involving Bill Clinton and Monica Lewinsky.

Khan captures the bizarre culture of Guantánamo, where lawyers struggle to represent their clients — and to bring them chai lattes from the Starbucks on the base — in the face of military officials who try to obstruct her and the lawyers at every turn. Like Khan, many of the lawyers came to believe that their clients were innocent men who had been swept up by mistake. Khan says she has “made every effort to verify” the prisoners’ accounts, but her sources are sparse and most of them seem to be news media reports. She does not address the possibility that the subset of prisoners she met — Afghans seized in Pakistan and sold by bounty hunters — were more likely to be innocent than other detainees.

Nevertheless, her gut-wrenching first-person accounts of detainee abuse by American soldiers at the Bagram Air Base are consistent with the findings of a recent report by the inspector general of the Justice Department on detainee interrogations in Guantánamo, Afghanistan and Iraq. F.B.I. officials observed detainees being subjected to sexual humiliation, body cavity searches and other indignities similar to the abuses that Khan reports.

The fact that many of the prisoners Khan describes appear to have been innocent of the vague accusations against them, were imprisoned for years without formal charges or fair hearings and were eventually released by the United States without apology or compensation makes the abuse they suffered during years of imprisonment all the more outrageous. By giving us the perspective of the detainees, “My Guantánamo Diary” provides a valuable account of what we can now recognize as one of the most shameful episodes in the war on terror. It is hard to read this book without a growing sense of embarrassment and indignation.