Palestinian autonomy is an illusion. A plan B involving a struggle for equal rights would expose the reality of occupation by Israel

Palestinian autonomy is an illusion. A plan B involving a struggle for equal rights would expose the reality of occupation by Israel 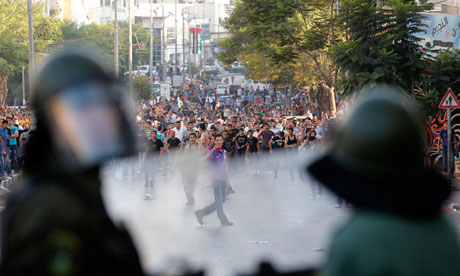 Abbas has recently threatened to relaunch the UN application if Israeli settlement expansion continues. This time he would seek UN non-member observer state status, but has yet to decide to consult with Arab and other states, and it may come to nothing again. Only a bankruptcy of ideas could be driving him towards this move, given the present situation of US acquiescence to regional Israeli hegemony, and Israel’s stunning success in diverting world attention from the conflict on its doorstep to Iran’s nonexistent nuclear weapons.

The president also faces serious trouble at home. The Palestinian economy, dependent on aid, is staggering under a chronic budget deficit and external debt of a billion dollars, nearly a fifth of GDP. Donor funding has declined from $1 billion to $750 million, and the Palestinian Authority has delayed paying 153,000 employees, prompting protests. Mass strikes and demonstrations have rocked the West Bank for days.

The protesters want an amendment of the 1994 Paris protocol, a key part of the Oslo accords that govern economic relations between Israel and the PA. Its main effect has been to keep the Palestinian economy dependent on Israel. It pegs Palestinian tax rates to Israel’s much higher ones, lays open Palestinians markets to Israel, though the reverse is not true, and through various restrictions, forces the Palestinian to trade only with Israel. The resulting poverty and 40% youth unemployment have pushed people on to the streets, and they now demand the resignation of the Palestinian prime minister, Salam Fayyad, and of the PA itself. Now Abbas has proposed cancelling the whole Oslo accords, including the economic and security agreements. However, no decision was reached, and whether it’s another empty threat remains to be seen.

Given this situation, should there not be a reassessment of Palestinian political strategy? To date there is no sign that the Palestinian leadership, or indeed any official body, can think beyond the two-state solution. Yet the facts on the ground point to a very different conclusion. Israel now controls 62% of West Bank land – encompassing most of its richest farmland, including the fertile Jordan Valley. The colonisation process continues unabated, and to date Israel has resisted every call for a settlement based on a two-state solution. Despite this, the west has been extremely reluctant to press Israel.

Few would dispute the Palestinian entitlement to a state, but it simply cannot be achieved given the present reality. It was always folly to pursue the two-state solution in a context that militated against its ever happening. Today’s Israel-Palestine is demonstrably one state, impossible to divide. But it is a discriminatory state operating an apartheid-style system against the Palestinians with impunity. Gross economic inequality is one indicator of this system.

This situation demands a new Palestinian strategy, a Plan B that converts the Palestinian struggle for two states into one for equal rights within what is now a unitary state ruled by Israel. The first step in this plan requires a dismantlement of the PA as currently constituted, or at least a change of direction for the Palestinian leadership. The PA’s role as a buffer between the occupier and the occupied should end, along with the illusion of a spurious Palestinian autonomy it has fostered. This has not only shielded Israel from facing its legal obligations as an occupying power, but it has created a false equivalence between occupier and occupied.

The PA’s new relationship with Israel should be restricted to pursuing the rights of its occupied people, including the right to political resistance. The PA should lead the campaign to prepare Palestinians for the abandonment of the two-state idea and the struggle for equal rights instead. Without a middleman to hide behind, the reality of Israel’s occupation will be exposed, and the logic of a civil rights struggle will be inarguable. Israel has hitherto enjoyed a cost-free occupation, with a Palestinian leadership that does Israel’s administrative and security work and a donor community that picks up the bill. At one stroke, Plan B shreds these fig leaves, and removes the chimera of a Palestinian state that has diverted attention from the reality on the ground.

The 2.5 million potential new Arab citizens of Israel would be able to challenge its much-vaunted democracy, and upend the old order in the Palestinians’ favour. Will they have the courage to grasp the challenge?