Pilger: The truth about the criminal bloodbath in Iraq can’t be ‘countered’ indefinitely 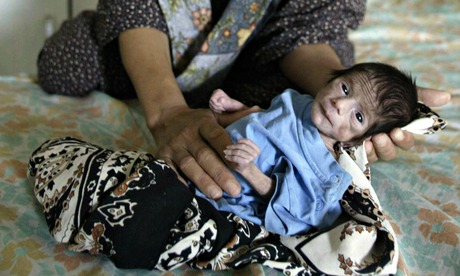 A baby in a Baghdad hospital in July 2003. ‘Half a million Iraqi infants died as a result of sanctions, according to Unicef.’ Photograph: Joseph Barrak/AFP/Getty Images

A baby in a Baghdad hospital in July 2003. ‘Half a million Iraqi infants died as a result of sanctions, according to Unicef.’ Photograph: Joseph Barrak/AFP/Getty Images

The BBC’s Today programme is enjoying high ratings, and the Mail and Telegraph are, as usual, attacking the corporation as leftwing. Last month a single edition of the Radio 4 show was edited by the artist and musician PJ Harvey. What happened was illuminating.

Harvey’s guests caused panic from the moment she proposed the likes of Mark Curtis, a historian rarely heard on the BBC who chronicles the crimes of the British state; the lawyer Phil Shiner and the Guardian journalist Ian Cobain, who reveal how the British kidnap and torture; the WikiLeaks founder, Julian Assange; and myself.

There were weeks of absurd negotiation at Broadcasting House about ways of "countering" us and whether or not we could be allowed to speak without interruption from Today’s establishment choristers. What this brief insurrection demonstrated was the fear of a reckoning. The crimes of western states like Britain have made accessories of those in the media who suppress or minimise the carnage.

The Faustian pacts that contrived a world war a century ago resonate today across the Middle East and Asia, from Syria to Japan. Then, as now, cover-up was the principal weapon. In 1917 David Lloyd George, the British prime minister, declared: "If people knew the truth, the war would be stopped tomorrow. But of course they don’t know and can’t know."

On Harvey’s Today programme I referred to a poll conducted by ComRes last year that asked people in Britain how many Iraqis had been killed as a result of the 2003 invasion. A majority said that fewer than 10,000 had been killed: a figure so shockingly low it was a profanity.

I compared this with scientific estimates of "up to a million men, women and children [who] had died in the inferno lit by Britain and the US". In fact, academic estimates range from less than half a million to more than a million. John Tirman, the principal research scientist at the MIT Centre for International Studies, has examined all the credible estimates; he told me that an average figure "suggests roughly 700,000". Tirman pointed out that this excluded deaths among the millions of displaced Iraqis, up to 20% of the population.

The day after the Harvey programme, Today "countered" with Toby Dodge of the LSE – a former adviser to General Petraeus, one of the architects of the disasters in both Iraq and Afghanistan – along with Mowaffak al-Rubaie, a former Iraqi "national security adviser" in the occupation regime, and the man who led Saddam Hussein to his lynching.

These BBC-accredited "experts" rubbished, without evidence, the studies and reduced the number of dead by hundreds of thousands. The interviewer, Mishal Husain, offered no challenge to their propaganda. They then "debated" who was responsible. Lloyd George’s dictum held; culpability was diverted.

But for how long? There is no question that the epic crime committed in Iraq has burrowed into the public consciousness. Many recall that "shock and awe" was the extension of a murderous blockade imposed for 13 years by Britain and the US and suppressed by much of the mainstream media, including the BBC. Half a million Iraqi infants died as a result of sanctions, according to Unicef. I watched children dying in hospitals, denied basic painkillers.

Ten years later, in New York, I met the senior British official responsible for these "sanctions". He is Carne Ross, once known in the UN as "Mr Iraq". He is now a truth-teller. I read to him a statement he had made to a parliamentary select committee in 2007: "The weight of evidence clearly indicates that sanctions caused massive human suffering among ordinary Iraqis, particularly children. We, the US and UK governments, were the primary engineers and offenders of sanctions and were well aware of the evidence at the time but we largely ignored it and blamed it on the Saddam government … effectively denying the entire population the means to live."

I said to him: "That’s a shocking admission."

"Yes, I agree," he replied. "I feel ashamed about it …" He described how the Foreign Office manipulated a willing media. "We would control access to the foreign secretary as a form of reward to journalists. If they were critical, we would not give them the goodies of trips around the world. We would feed them factoids of sanitised intelligence, or we’d freeze them out."

In the build-up to the 2003 invasion, according to studies by Cardiff University and Media Tenor, the BBC followed the Blair government’s line and lies, and restricted airtime to those opposing the invasion. When Andrew Gilligan famously presented a dissenting report on Today, he and the director general were crushed.

The truth about the criminal bloodbath in Iraq cannot be "countered" indefinitely. Neither can the truth about our support for the medievalists in Saudi Arabia, the nuclear-armed predators in Israel, the new military fascists in Egypt and the jihadist "liberators" of Syria, whose propaganda is now BBC news. There will be a reckoning – not just for the Blairs, Straws and Campbells, but for those paid to keep the record straight.