THE ETHNIC CLEANSING OF PALESTINE: NOTHING TO CELEBRATE! ON WEDNESDAY 7th MAY PROTEST THE ‘ISRAEL AT 60’ CELEBRATIONS Assemble 6pm @ Ballsbridge Court Hotel, Dublin 4 – Wear black clothing

Attending the celebrations on the anniversary of the founding of the State of Israel is to celebrate a process of brutal ethnic cleansing and colonisation.

On Wednesday 7th May the Israeli Embassy in Ireland is hosting an event at the Ballsbridge Court Hotel in Ballsbridge, Dublin 4, celebrating the 60th anniversary of the founding of the State of Israel.

We call on all public representatives invited to attend this event to stay away in protest at the campaign of ethnic cleansing of Palestine and the current horrendous treatment of the Palestinian people by the State of Israel.

We will peacefully and lawfully protest outside this event and say shame upon those who chose to attend. We ask those attending to wear black clothing or armbands to mourn the people of Palestine, then and now.

Israel was founded subsequent to a UN decision partitioning Palestine in 1947, but the state it founded was not within the partition boundaries set by the UN. Instead, before and after that UN decision Zionist forces carried out a ruthless campaign of ethnic cleansing, driving out the indigenous Palestinian population through a campaign of terror and selective massacre. The Israeli State was founded in 1948 in the midst of the forceful flight and expulsion of over 700,000 Palestinians, involving the destruction of over 500 villages amid scenes of terror. Celebrating the foundation of the State of Israel is to celebrate this campaign of terror and ethnic cleansing.

Attending the Israeli celebrations is tantamount to endorsing this illegal colonisation of Palestinian lands far beyond the UN partition boundaries, and the process of ruthless colonisation that accompanied it and that continues to this day.

We call on you to show solidarity with the Palestinian People and their struggle for their national, political, civil and human rights and call for the Right of Return of the Palestinian refugees expelled by Israeli forces before and after 1948, as enshrined in UN Resolution 194.

This protest and call to public figures was initiated by the Ireland Palestine Solidarity Campaign and endorsed by The Nakba Coalition. 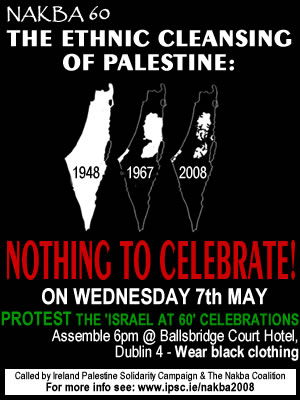