Seven years on for the Galway Alliance Against War 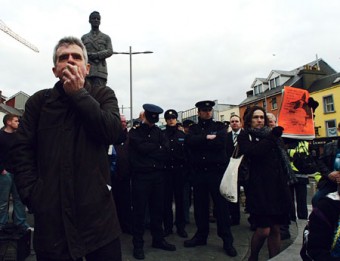 At just after 3pm on Tuesday, a middle aged man heard his phone ringing. He picked it up to answer.

At just after 3pm on Tuesday, a middle aged man heard his phone ringing. He picked it up to answer.

The voice on the other end is enraged: “You’ll be f**king killed. F**k you and f**k your sister.”Niall Farrell, the head Galway Alliance Against War (GAAW), simply hung up. Extraordinarily this was the fourth death threat he had received in nine months.

This year the GAAW marked its seventh anniversary. It has been an extraordinary seven years for the group. From the Salthill Airshow to Liam Mellows, to its persistent and energetic campaigns against the wars in the Middle East, the GAAW has become a regular feature of the city.

It was formed, as it states on an anti-war website, to oppose the Afghanistan war, which it describes as “a war waged by the most powerful country in the world against one of the poorest and most underdeveloped”.

Its anniversary statement adds, “It is not war the Afghans need but help – a third of the children suffer malnutrition, life expectancy is only 44 years, and the country is one of the most underdeveloped lands in the world.”

It sounds almost too simple: Big bold USA versus nice little Afghanistan. But the murky post-Soviet period where the Taliban grew out the mire of misery and tried to inflict their misery on the Afghan people is extremely complicated.

The war, thus far, has been a calamity, a disaster of mismanagement and wishful thinking. But it is a war that must be won.

In his letter Niall Farrell claimed that the GAAW is against terrorism. But Afghanistan under the Taliban was its breeding ground. They took in Osama Bin Laden when no one else would. They inflicted unimaginable suffering on a country already ruined by Soviet occupation. And after September 11 what else was to be done?

When I put this to Mr Farrell his response was as forceful as expected. “It could not be justified,” he said, “There’s no case to show that the Afghanis has anything to do with September 11. The UN opposed it. What happened was that the US decided to go to war and retrospectively the war is supported by the UN. You were talking about the strongest country in the world attacking the weakest. The point that we’re making about Afghanistan is that it was unjustifiable to attack Afghanistan.”

But distrust does exist about the GAAW’s motives. Quite a few people, as the recent spate of letters in theGalway Advertiser shows, believe the GAAW is really the GAAA – the alliance against America.

To this Mr Farrell responds, “One of the problems with this whole war issue is that the main force behind the war has been the USA. Most of our focus has been to do with Ireland and that Ireland has been assisting with illegal actions like the invasion of Afghanistan and Iraq.”

Today, Mr Farrell says, the GAAW is most concerned by Ireland’s role in the world. Fair enough. The Irish Government allows the US the use of Shannon Airport. But he must also remember the Government’s responsibility is to the best interests of its people, no matter how distasteful the sacrifices required.

Our relationship with the USA is vital to the economic well-being of the country and it is simply unrealistic to expect any government to show the level of righteous anger Mr Farrell and the GAAW is safe in showing from its position of opposition. But such is the nature of opposition and will remain so.

Mr Farrell disagrees: “I think that argument is nothing other than a myth, it doesn’t stand up to any real scrutiny. Take the French Government’s stand on the invasion of Iraq for example, where ‘French fries’ became ‘Liberty fries’, the antagonism with France was so great in the US – sponsored by the US media. But in fact US investment in France actually increased. US companies are in Ireland for financial not ideological reasons and they will stay as long as it is economically worthwhile.

“But there is also the moral question of supporting a war that results in the deaths of thousands upon thousands of people, of facilitating the kidnapping, torturing, and disappearing of people, all for economic reasons – blood money. Not a terribly Christian motive.”

His answers and tone are vigorous and even if you have reservations about his politics Mr Farrell has energy. But how does he think his organisation is viewed in Galway, despite the widespread anger at their attempts to get rid of the Airshow.

“I feel most people see it as positive. I find people are not antagonistic whatsoever. The death threats, they don’t really bother me. It is worth noting that one TD, six city councillors and at least two county councillors have supported our stand on issues like the war and the war show. Also, GAAW was the backbone of the No to Lisbon campaign in Galway. We organised and carried a full canvas of this city and the majority of people in Galway voted No to Lisbon. I actually feel GAAW is held in high esteem among progressive thinking people in this city.”

But he adds that he is concerned at how the threats have been treated by the authorities. “The Gardaí have refused to take this seriously. If it was a local FF councillor getting these threats, or a TD, or any local person, the Gardaí would have done something. There’s a culture inside certain elements of the Gardaí where they don’t like people objecting to militaristic jamborees called airshows.”

Finally, I asked Mr Farrell what he made of claims that the GAAW is not vocal enough of wars that have nothing to do with the USA or UK

“It’s our intention at our AGM to have a speaker on the war in the Congo. With regards to the attacks in Mumbai, we had last week a meeting on that area. But in the end my view would be it’s easy to spot the terrorist, he’s the one with the small bomb.”